Hokes Bluff police officer and former sheriffs deputy Jason Barry Raley has been charged with aggravated child abuse. The 30 years old Raley faces felony charges for allegedly abusing a fiver year old boy in various parts of the Hokes Bluff area. Etowah County Sheriff Todd Entrekin stated “My message is very simple, whether you are a law enforcement officer or work in any other career field, if you hurt a child or break the law you will go to jail,” Raley is being held on one hundred thousand dollars bail at the Etowah County Detention Center. The case is still under investigation. Child abuse is a serious crime and can have lasting effects on a persona life if they are found guilty and convicted in a court of law. The most advisable thing to do in this situation is to seek advice from a reputable Birmingham criminal defense law firm and find out what your options are. Criminal procedure in the United States is the method through which the government enforces criminal laws. The overall criminal process includes a specific set of rules. Below is an orderly list of what happens in this process. A Birmingham criminal defense attorney can help you with individual cases but as a general overview this is how criminal cases go:

•    When it  has been determined that a crime has been committed an arrest is made or charges are filed for a warrant
•    The accused person will undergo the booking process where administrative information is gathered such as telephone number, fingerprints, age, name and address.
•    Informal arraignment (within 2 – 48 hours). Here, the arrested person will be informed of the charges against them and be given their Miranda rights if they have not already done so.
•    Bail will be set unless the charge is murder. If the charge is murder it is up to the judge whether or not to set bail.
•    Defendant will leave bail or remain in custody. They will then be notified of when and where they are scheduled to appear next.
•    Preliminary hearing (usually within 7 – 10 days of informal arraignment). In this step of the process, the prosecution must prove that the charges are valid, and they will likely call witnesses and show evidence. The defense typically will not during this step. The presiding judge will determine whether or not the person should actually go to trial.The exception to this step is if the case is remanded to federal court. In this situation the defendant will go before a private grand jury.
•    A plea bargain may occur. This is an arrangement where the prosecutor will recommend a reduced term of incarceration or probation in exchange for a guilty plea.
•    Formal arraignment. Defendant may plea for each charge listed in the preliminary hearing. If the defendant pleads “not guilty” the process will continue.
•    A trial will be brought about within 180 days of criminal complaint, and the accused may present their defense
•    Sentencing occurs.
•    Appeals may be filed within 30 days.

Early in the criminal process there are many cases, but as they progress they begin to dwindle in number. Some cases get dismissed and others are referred for treatment or counseling

The general public generally associates white-collar crime with social status, respectability,
sophistication and wealth; however the Federal Bureau of Investigation’s definition takes none of
these into consideration. The FBI has defined white-collar crime as “. . . those illegal acts which are
characterized by deceit, concealment, or violation of trust and which are not dependent upon the
application or threat of physical force or violence. Individuals and organizations commit these acts to
obtain money, property, or services; to avoid the payment or loss of money or services; or to secure
personal or business advantage.” In more basic terms, white-collar crime is everything you were taught
not to do as a child: lying, cheating and stealing.

White-collar crime costs the United States an estimated $300 billion every year, and includes the
following violations: insider trading, securities fraud, antitrust violations, bribery, embezzlement,
environmental law and several more. In most cases perpetrators view such crimes as “skimming from
the top” and don’t see the long-term ripple effect of their actions. As a company begins to see less
money, they make up for it by raising costs for the consumers, cutting pays and cutting positions.

In the 1970’s and 1980’s The U.S. Congress passed a wave of laws and statutes to help prevent white-
collar-crime. Passed in 1970, the Racketeer Influenced and Corrupt Organizations Act (RICO) is a federal
law designed to combat organized crime in the United States. It allows prosecution and civil penalties
for racketeering activity performed as part of an ongoing criminal enterprise. RICO made it easier to
prosecute corrupt organizations and seize related assets. In 2002, shortly after the Enron scandal,
Congress passed the Sarbanes-Oxley Act (SOX) in 2002 to improve the relationship and accountability
between corporations and their stakeholders.

Criminal penalties for white-collar crimes vary, but most laws will demand a monetary fine, a prison
sentence or both. Sentencing guidelines exist to ensure that a judge is given little discretion on
the sentence enforced. For felonies, prosecutors sometimes use grand juries to make decisions.
Punishments that can be imposed include compensation of payment, community service, fines, jail/
prison incarceration and probation. A civil action brought by the government may seek disgorgement.
This means that the accused party must turn over to the government any profits obtained due to
criminal action. In some cases the government will even request asset forfeiture, which allows the
government to seize anything that the accused party has purchased with the money in question. Victims
can bring their own civil liberty cases which would seek recovery of any financial losses they have
suffered due to the offense.

White-collar criminal cases are complex in nature and involve complicated financial documents.
If charged with a white-collar crime it is suggested to hire an attorney.

A federal judge in Mobile, Alabama ruled that a drug dealer who sold slightly more than half of an ounce of crack cocaine will be sentenced to more than three years in prison last week.

Clint Coydara Buchanan was one of 19 people rounded up after an intense year-long drug investigation. He was not caught during the first round up in which investigators arrested 12 of the 19 members of the network in April, but was apprehended later on. Buchanan admitted to selling crack to an informant working with law enforcement investigators.

According to court records, Buchanan made the sales on Sept. 28 and Oct. 14 behind the Foley trailer where he was staying at the time. The total amount of crack that Buchanan sold was 18.67 grams, or 0.66 ounces. U.S. District Judge Ginny Granade imposed a sentence of three years and one month of jail time, to be followed by three additional years of supervised release.

Assault Against a 3-month-old Child

Tremain Gates, a 23-year old Calera, AL resident was arrested for domestic violence toward a 3-month-old child on Aug. 25th. 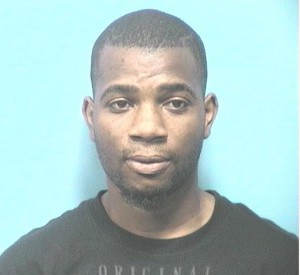 In the case, Gates reportedly threw the child against a wall and then onto the floor while baby sitting. When the mother returned home, she notices that her child could only open one eye, was very tired, and crying excessively.

After realizing the baby’s injuries, the mother took her child to Shelby Baptist Medical Center where they found that the child’s skull had been fractured.

Gates shocked the entire community with such a horrible event.

“I’m basically at a loss for words. I mean it’s kind of shocking especially you know when it involves a small child,” said a resident of Calera and neighbor of Gates.

Gates is currently being held at Shelby County jail on a 1 million dollar bond, and is being charged with 1st degree domestic violence.

In order for you to claim attorney-client privilege on any information, it has to have been communicated to an attorney who is a member of the state bar. It also has to be information that was exchanged as a process of you getting legal information or your attorney getting information from you about your case. For example, if you and your attorney were actually trying to figure out how to commit a crime, attorney-client privilege would not protect any of the communication involved in the commission of that crime.

Attorney-client privilege also protects you against attorneys that are unethical. If they are found to be divulging information about their clients that they should not be discussing with anyone except those clients, they may be removed from the bar. It doesn’t matter if they are still representing you or not. It is considered part of their obligation to you to keep your information private from the time they represent you forward.

Attorney-client privilege is, more than anything, conditional. It is not dependent solely upon the fact that person with whom you are communicating is an attorney, it depends upon the purpose and the circumstances of those communications